This story was published originally in
The University of Alabama College of Arts & Sciences’ Desktop News.

Can you imagine opening a newspaper and seeing an advertisement for a runaway slave? In today’s world, it’s hard to fathom what it must have been like to live in a time when slavery was accepted. Dr. Joshua Rothman, a professor of history and chair of the Department of History, is on a mission to make understanding that world—and the many things we can learn from it—a lot easier.

Rothman is a part of a team that received a $300,000 grant from the National Endowment for the Humanities in support of their current project, “Freedom on the Move: A Database of Fugitive from North American Slavery.” The project, which Rothman co-directs and has been working on alongside colleagues at Cornell University and the University of New Orleans, aims to digitize every advertisement for a runaway slave in North American newspapers; he estimated that there were anywhere from 100,000 to 200,000 such advertisements. “Runaway ads thus not only can tell us a lot about the institution of slavery from a scholarly perspective, but they also are valuable for genealogists and are incredible teaching tools,” he said. 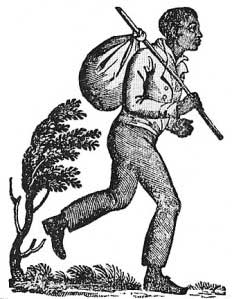 “All at the same time, they provide evidence of widespread resistance to slavery, detailed personal information about enslaved people who fled, and graphic demonstrations of the lengths to which whites would go to try and retrieve people who they considered lost property.”

Rothman’s primary role in the project centers around exposing high school and college classrooms to the project, which will hopefully aid students in grasping slavery in a more concrete way.

To continue reading this story, follow this link to the College of Arts & Sciences’ Desktop News site.