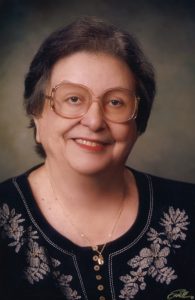 The most recent edition of Collegian featured a story about the generosity and long-term legacy of the late Dr. Helen Delpar, who passed away in 2018.

“Those who knew long-time history professor Dr. Helen Delpar describe her as a character. Voted ‘Most Likely to Succeed’ by her high school classmates, she never owned a car and instead walked to work nearly every day until she retired in her late 60s. Though she never married and enjoyed solitude, she loved the company of others and had a deep-seated drive to focus her intellect and abilities into not only improving herself, but also serving the larger community.

“‘To be honest, I was kind of intimidated even before I met her,’ said Dr. Steve Bunker, who came to know Delpar after filling her position when she retired from UA in 2006. ‘She was rather cantankerous at times and challenging, but she was an impressive person who was fundamentally generous. When she saw anyone having a rough time, she was there.’

“When UA hired Delpar as an assistant professor in 1974, the Latin American studies program didn’t exist, though Delpar quickly put UA on the map for the subject as a prolific Latin American scholar. She and faculty members Larry Clayton and Ed Moseley made UA the seat of the Southeastern Council of Latin American Studies, of which Delpar would later serve as president.

“Perhaps her biggest legacy, however, stemmed from her role as director of UA’s graduate program in history. Having been given a chance herself to pursue a Ph.D. at Columbia University in the 1960s, Delpar felt it her duty to expand opportunity for others.”