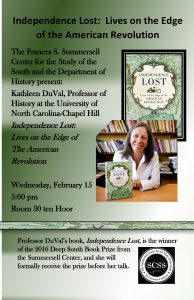 On February 15, Kathleen DuVal, Professor of History at the University of North Carolina-Chapel Hill, will be speaking about her book, Independence Lost: Lives at the Edge of the American Revolution, winner of the 2016 Deep South Book Prize from the Summersell Center for the Study of the South. Focusing on the American Revolution as it played out along the Gulf Coast, Independence Lost demonstrates the imperial dimensions of the conflict and the multitude of ways those who are rarely accounted for in familiar renderings of colonial society understood and struggled for their self-determination.

Professor DuVal will formally receive the Deep South Book Prize before her talk.