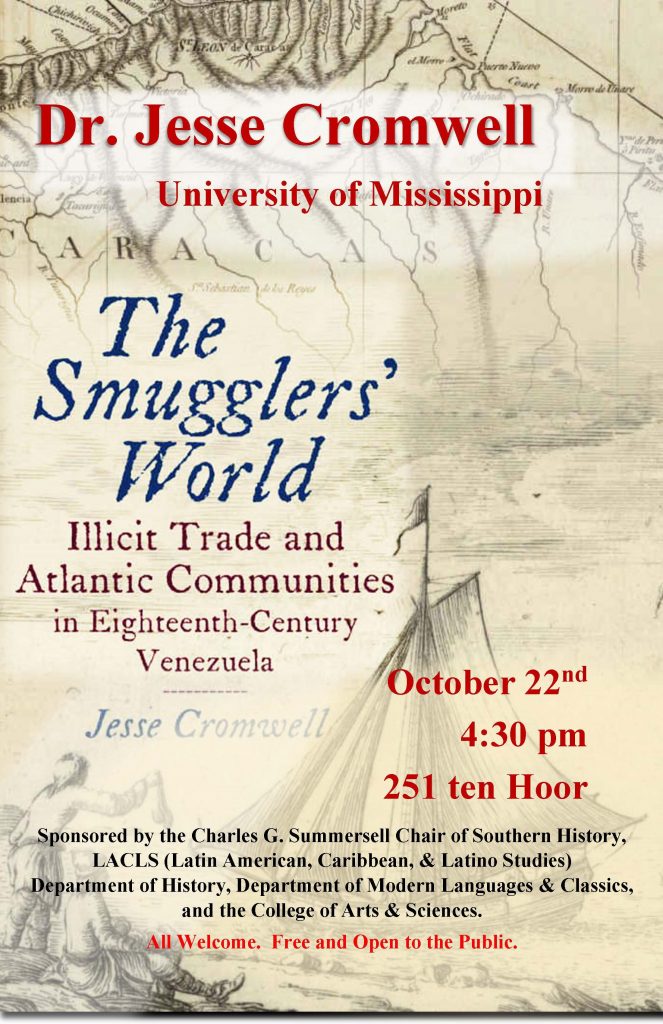 University of Mississippi Associate Professor Jesse Cromwell will speak on “The Smugglers’ World: Illicit Trade and the Atlantic Communities in Eighteenth-Century Venezuela,” on October 22, 2019, at 4:30 PM, in 251 ten Hoor.

“Jesse Cromwell is Associate Professor of Colonial Latin American history.  His research focuses on the imperial and Atlantic histories of Spanish colonialism in the eighteenth-century circum-Caribbean with a special emphasis on how the Bourbon Reforms affected the transimperial interactions, commerce, and mobility of a host of populations in the region.  Professor Cromwell joined the faculty at the University of Mississippi in 2012 after earning his B.A. from Brown University and his M.A. and Ph.D from the University of Texas at Austin.

“Professor Cromwell’s first book, The Smugglers’ World: Illicit Trade and Atlantic Communities in Eighteenth-Century Venezuela (Omohundro Institute-UNC Press, 2018) reinterprets the meaning illicit commerce in the early modern Atlantic.  More than simply a transactional relationship or a political-economy concern of empires, smuggling became a societal ethos for the communities in which it was practiced.  For most of the colonial period, subjects of the commercially-neglected Province of Venezuela depended on contrabandists from the Dutch, English, and French Caribbean.  These illegal, yet scarcely-patrolled, rendezvouses came under scrutiny in the eighteenth century as Bourbon reformers sought to regain control and boost productivity in the province.  Subsequent crackdowns on smuggling sparked colonial tensions.  Illicit trade created inter-imperial connections and parallel communities based around provisioning as a moral necessity.  It threw the legal status of people of color aboard ships into chaos.  Smuggling’s participants normalized subversions of imperial law and proffered mutually agreed-upon limits of acceptable extralegal activity.  Venezuelan subjects defended their commercial autonomy through passive measures and occasionally through violent political protests.  This commercial discourse between the state and its subjects was a key part of empire making and maintenance in the early modern world.”

This event is sponsored by the Charles G. Summersell Chair in Southern History; Latin American, Caribbean, & Latino Studies; Department of History, Department of Modern Languages & Classics, and the College of Arts & Sciences.

Admission is free and all are welcome.