Joshua Keil, a PhD student of Dr. Lesley Gordon, joined his mentor’s HY 315 – The Civil War course on an excursion to the Vicksburg National Military Park, in Vicksburg, Mississippi. His travel log below recounts their shared experiences.

“The Key to the Past”
Joshua Keil

In the fall of 2019, undergraduates from Dr. Lesley Gordon’s Civil War course, as well as graduate students from The University of Alabama and students and faculty from the University of Southern Mississippi, set out for the fortress city of Vicksburg, Mississippi. In Dr. Gordon’s class, we had been discussing the comparison between Gettysburg and Vicksburg, and which battle was more crucial to ending the war. Beyond the obvious connection between the two battles – Gettysburg took place July 1-3, 1863, while the surrender of Vicksburg occurred the following day, July 4 – we also debated why Gettysburg has so overshadowed Vicksburg in the public imagination. Some of us, particularly those who had been to Gettysburg, were doubtful that any battle could topple the mythology surrounding Chamberlain at Little Round Top, the desperate fighting around Devil’s Den, or Pickett’s Charge. We were anxious to see if Vicksburg could compete with this lore – and we were not disappointed. The Vicksburg National Military Park is a gigantic site. Stretching out for some 16 miles, visitors have their pick of exhibits, monuments, battlefields, siege lines, museums, a gift shop, and even a theater that mimics the caves dug throughout the city during the siege. Among the most memorable features at the park is the USS Cairo Museum. Named (and pronounced) after the city in Illinois, the 16-gun ironclad hit a Confederate mine in December 1862 and sank to the bottom of the mighty Mississippi River. But it was not lost forever. For, in the mid-1960s, the Cairo was dragged from the river in sections and now sits in a concrete cradle in the park where visitors can walk its decks and re-imagine the stifling heat and cramped conditions endured by those who served aboard these metal vessels. The degree of preservation is incredible; and you can still see the splintered wound left by the mine in the ship’s wooden hall. 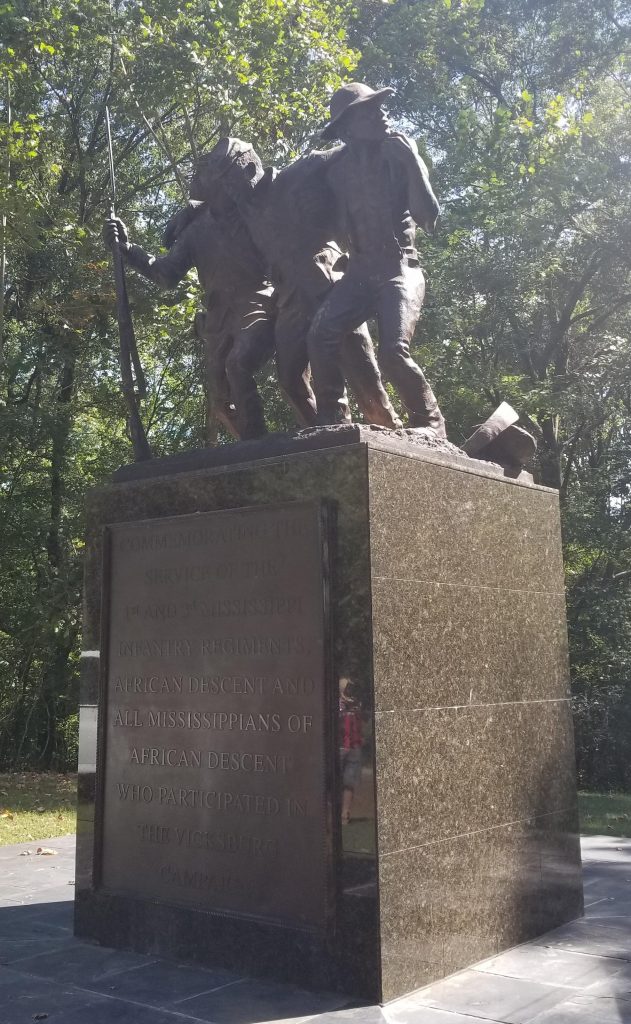 In addition to the Cairo, the number of monuments scattered throughout the park is staggering and one is seldom not in their presence. As we traveled the battlefield, our vans passed countless monuments to various regiments who fought at Vicksburg and it would have taken several additional days to read all the epitaphs. One of the most impressive of these was the monument commemorating African-American soldiers who fought for the Union at the Battle of Milliken’s Bend, in 1863. Completed in 2004, the statue depicts three bronze figures, one looking back, one wounded and supported by his comrades, and another looking forward to the future, all standing upon a block of African granite. This engagement proved to a skeptical nation that African Americans were just as brave as white soldiers and would not flee from battle; and the monument is a powerful tribute to their sacrifice.

If you have ever been to a Civil War battlefield, you know the power they possess. When I was twelve years old, my family took a trip to Gettysburg and it literally changed my life. My father, who is not known for his ghost stories, swore that he felt the presence of something that first morning of our stay. While my mother, brother, and I slept, he walked out from the hotel at sunrise and found himself standing alone in a field, shrouded in mist. He said that things were moving in the fog and he could hear the metallic percussion of an army on the move. Later that day, my parents bought me a shirt at a gift shop from the newly released film, Gettysburg, and I hung it in my closet at home, taking it out now and then to hold in silent reverence. I remember feeling stunned that a war was fought here, in our backyards, farms, and forests. It all seemed so close, and yet, so very far away. I realize now that I brought something else home with me that summer; something I am only now beginning to understand. Vicksburg has this same weird pulse crackling below the surface. The soil, trees, leaves, and sky sit somber under the weight of what happened there. Somehow, those events have bled out into the landscape, transforming the feel and fabric of the place. Erich Guenther, one of the undergraduates who took the trip to Vicksburg, reflected: “The sloping, rolling landscape – some of it natural, parts of it man-made – was picturesque, but in a haunting sort of way.” The place is beautiful, but it is a damaged sort of beauty. “My first reaction to seeing Vicksburg was shock,” said Abigail McCool, and this sentiment was shared by many of her classmates. “Seeing a real battlefield was an experience like no other,” wrote Brooke Landolt. “No words can describe the personal experience of viewing the landscape of Vicksburg,” said Dalyn Helms. Just as Vicksburg was the key to the South, it is now a key to a hidden world. Battlefields unlock a door out through the present and into the past. And they can change the course of your life, as Gettysburg, and now Vicksburg, have for me. In the words of Silas Dorsey, another undergraduate who wrote about Vicksburg after the trip, “It truly was where the war was won.”