Lawrence Kreiser, Jr., a doctoral alum of The University of Alabama Department of History and Associate Professor of History/Chair of Social Sciences at Stillman College, recently published his fourth book, Marketing the Blue and Gray: Newspaper Advertising and the American Civil War.

“Marketing the Blue and Gray analyzes newspaper advertising during the American Civil War. Newspapers circulated widely between 1861 and 1865, and merchants took full advantage of this readership. They marketed everything from war bonds to biographies of military and political leaders; from patent medicines that promised to cure almost any battlefield wound to “secession cloaks” and “Fort Sumter” cockades. Union and Confederate advertisers pitched shopping as its own form of patriotism, one of the more enduring legacies of the nation’s largest and bloodiest war. However, unlike important-sounding headlines and editorials, advertisements have received only passing notice from historians. As the first full-length analysis of Union and Confederate newspaper advertising, Kreiser’s study sheds light on this often overlooked aspect of Civil War media. 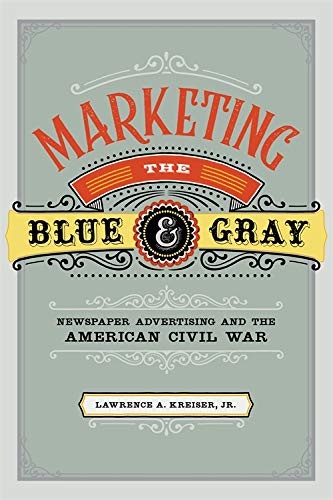 “Kreiser argues that the marketing strategies of the time show how commercialization and patriotism became increasingly intertwined as Union and Confederate war aims evolved. Yankees and Rebels believed that buying decisions were an important expression of their civic pride, from “Union forever” groceries to “States Rights” sewing machines. He suggests that the notices helped to expand American democracy by allowing their diverse readership to participate in almost every aspect of the Civil War. As potential customers, free blacks and white women perused announcements for war-themed biographies, images, and other material wares that helped to define the meaning of the fighting.

“Advertisements also helped readers to become more savvy consumers and, ultimately, citizens, by offering them choices. White men and, in the Union after 1863, black men might volunteer for military service after reading a recruitment notice; or they might instead respond to the kind of notice for “draft insurance” that flooded newspapers after the Union and Confederate governments resorted to conscription to help fill the ranks. Marketing the Blue and Gray demonstrates how, through their sometimes-messy choices, advertising pages offered readers the opportunity to participate―or not―in the war effort.”