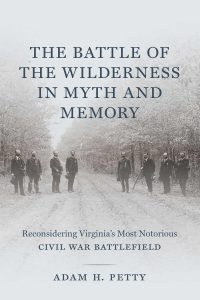 Petty’s inspiration for the work came from his first seminar paper as a student in the department’s graduate program in which he researched the 1863 Mine Run Campaign in Virginia. While conducting an environmental analysis of the campaign his attention was captured by the densely forested region of Virginia west of Fredericksburg, called the Wilderness. When Lee and Grant clashed in this area in the Spring of 1864, their armies had trouble navigating through the dense thicket. Worse yet, the dry underbrush had a tendency to catch fire easily. The Battle of the Wilderness in Myth and Memory explores both the ways in which the opposing armies and soldiers dealt with that hostile environment and the historical myths that their struggles there fostered.

Through the examination of both veteran and eyewitness accounts, as well as subsequent secondary treatments of the battle, Petty details the development of the historical myths and the ways in which those misunderstandings about the environment of the Wilderness influenced combat and military operations during this time.

Adam Petty earned his MA from Alabama in 2014 and his PhD in 2018. He also served as editor of the Southern Historian.

After graduation he was hired by The Joseph Smith Papers, a project run by the history department of the Church of Jesus Christ of Latter-day Saints. The project aims to gather all of Joseph Smith’s documents and to publish accurate transcripts of those documents, along with textual and contextual annotation. He also studied Latin American history at UA and is fluent in Spanish, which has allowed him to work on the Church History Department’s global history project.

Petty credits his mentors, George Rable and Lawrence Kohl, emeritus UA History Professors, with molding him as a teacher, writer, and historian.  Both men inspired him with their intellect and character. If he could provide one piece of advice for history students, he would tell them to take advantage of whatever opportunities present themselves. “Each experience you have can open unexpected doors down the road,” he said.